Rosetta is blind but she sees everything. Her cloudy, opalescent eyes gaze from their Renaissance niche through the window on to the Piazza Santa Maria Novella and beyond to the cathedral where a crucifix by Giotto hangs in the center of the nave.

When Jenny Saville painted “Rosetta” in 2005-06, the British artist could not have known that one day her painting would grace a Florentine chapel in the cradle of the Renaissance. Yet even then there was no doubt that if any contemporary painter deserved to be regarded as the heir to Leonardo and Michelangelo, it was Saville.

Born in 1970, Saville was part of the Young British Artists generation whose radical expressions reinvigorated contemporary art in the 1990s. Yet while her peers, such as Damien Hirst and Tracey Emin, explored the possibilities offered by multimedia techniques and popular culture, Saville stayed faithful to figurative painting, a genre then considered the nadir of conservatism.

Today, the art world is more inclusive. Yet Saville remains in a class of her own. Decades of observing and drawing the human body have put her in a small, superlative league whose other members include Lynette Yiadom-Boakye and Claudette Johnson.

That it is these two artists, both women of color, who spring to mind as Saville’s most obvious peers illustrates a situation in which black people, after centuries of erasure, now infuse figurative art with noticeable vitality. That Saville continues to find the white body — although in Florence there are also paintings of black and brown people — an object of fascination, demonstrates the depth of a commitment that stretches back to childhood when, Saville has admitted, she was riveted by the plump. , fleshy body of her piano teacher.

Her enthusiasm for voluptuousness feeds into Saville’s reputation as the successor to painters such as Rubens, who worked at a time when curvaceousness particularly signaled beauty, health and fertility. In 2012, two of her large-scale drawings were shown in the Old Masters gallery at Oxford’s Ashmolean Museum, and three years later a further exhibition at the same venue responded to Venetian Old Master drawings.

However, her current exhibition in Florence demonstrates more ambitious time travelling. Aside from about 70 drawings and paintings that, alongside “Rosetta”, occupy Florence’s Museo Novecento, nearly 30 more works by Saville have also been installed in four other prestigious institutions: the Museo di Palazzo Vecchio, the Museo dell’Opera del Duomo, the Museo degli Innocenti and the Museo di Casa Buonarroti. The exhibition has been mounted with the financial support of Saville’s gallery Gagosian, whose contribution assisted with the renovation of the chapel in the Novecento. It catapults Saville’s art into direct encounters with that of Michelangelo, Botticelli, Domenico Ghirlandaio and Luca and Andrea della Robbia.

Perhaps the most memorable rendezvous occurs at the Casa Buonarroti. In a building once owned by Michelangelo, now a museum devoted to his legacy, the warren of galleries enclose the master’s famous drawing “Madonna and Child”. Made around 1525, it shows Mary gazing over her shoulder as Christ suckles her breast. At once appalled and resigned, her gaze encrypts her foreknowledge of her son’s fate.

Next to it hangs Saville’s “Cartonetto Study” (2019-21), a drawing of a naked woman — probably a self-portrait — with a baby sprawled on her lap, his tiny penis rendered as immaculately as her splayed breast and distended belly. That celebration of carnality echoes through the fearless eyes of the mother as she stares proudly over her baby’s head, her limbs entwined with his in a posture that is at once dynamic and relaxed, as if the pair’s explosive energies are being held in reserve.

Saville specializes in such images of stalwart, potent motherhood, expressing her subject’s vigor through whirling, wiry lines and blushes of pinks and reds. In the Casa Buonarroti, Saville’s fierce, athletic matriarchs challenge the testosterone-heavy aura of their macho Renaissance neighbors.

Saville does more than reclaim women’s corporeal power. Often her bodies flit back and forth across traditional gender lines.

Including a tiny terracotta torso by an anonymous 15th-century Florentine artist that boasts a belly that clenches virility in every ridge and furrow and Michelangelo’s marble relief, the “Battle of the Centaurs” (c.1491), with its mass of writhing, furious. limbs, these works encapsulate a culture that viewed men’s bodies as sites of infinite physical possibility while women’s bodies — Leonardo’s agile Madonnas and Titian’s huntress goddesses notwithstanding — were essentially passive receptacles for male desire, motherhood and wifedom.

Saville does more than reclaim women’s corporeal power. Often her bodies flit back and forth across traditional gender lines. To walk through the upper storey of the Museo Novecento, home to her most substantial display, is to find yourself immersed in a menagerie of human beings — male, female, child, everything in between — which grasp, embrace, sustain, desire, fear. and grieve for each other in a realm devoid of either physical or psychic boundaries.

Drawings of knees, necks and a single startlingly blue eye demonstrate how Saville obsesses over every detail before building up her grander. mise-en-scenes. These small studies are accurate in the extreme. Only when certain she can render the swell and hollow of, say, a human leg precisely, can she relinquish control in her large-scale pictures. Saville’s world may be one where borders — between bodies, genders, life and death — are hopelessly compromised but her own practice is grounded in disciplines of repetition and restriction, structure and strategy.

When Saville does upscale, the results are spectacular. In large works on paper such as “Out of One, Two (Symposium)” (2016), she flushes shell-pink washes over a tangle of bodies drawn in charcoal lines with ferrous red accents. Only the title tells you how many people comprise this seething heap of elbows, breasts, hands and thighs, although the woman’s face at the center — serene, Madonna-like — prevents collapse into abstraction.

In “Exodus” (2020-21), a group of standing figures bears the body of a young boy in their midst, his face doubled in a small image that Saville has slapped in the centre. Reminiscent of a press photograph, this painting within a painting hints at Saville’s awareness that hers is just one more in a sea of ​​images that bear witness to our epoch’s cruelties without alleviating them.

In truth, paintings such as “Exodus”, which clearly reference the current refugee crisis, would have been better placed at the Palazzo Vecchio. Here they would have acted as a gritty riposte to the panoramic battle scenes painted by 16th-century artist Giorgio Vasari to glorify Florence’s military victories.

Instead, the Palazzo’s Salone dei Cinquecento — the largest civic room in Italy at 54m long and 18m high — houses Saville’s “Fulcrum” (1998-99). One of the paintings that catapulted the artist to fame, at nearly three by five metres, it should stand up to the Salone’s majestic demands. In truth, mounted on its own temporary wall and framed by classical pillars and an arched niche, in cool gray. pietra serena, the ostensibly mighty painting looks a little dwarfed.

Nevertheless, “Fulcrum” is still a tour-de-force. Showing three gargantuan female bodies fused together in a sandwich of foaming, squashy flesh whose rolls, creases, mounds and crevices are evoked in a chilly palette of raw cream, mortuary green and ice pink, the painting dares us to not to flinch from women wilfully. defiant of social norms.

Rather than breasts, bellies and bums, it’s the battle scenes that ought to make us wince. Yet Vasari turns violence into a festival of honor and liberty. Even as limbs and flesh — all-male, natch — fall, break, rupture and bleed, it is clear this is war waged by superheroes. Yet the rippling muscles of the soldiers and bulging rumps of their steeds tells us that, like Saville, the 16th-century painter also exulted in the expression of flesh through pigment.

Are we most fascinated by the similarities or the differences between Saville and her ancestors? That compelling tension simmers through her encounter with Michelangelo at the Museo dell’Opera, home to the sculptor’s “Bandini Pietà”, which depicts the two Marys and Nicodemus tenderly bearing Christ’s broken body. With barely a muscle, bone or drape that does not twist and turn through serpentine curves, the sculpture encapsulates the fluid, timeless nature of collective grief.

Made in response to it, Saville’s drawing “Pietà I” (2019-21) shows six bodies, five of which are devoted to carrying the corpse of a sixth. Exhibiting her own sculptural tendencies, Saville uses stone-hued charcoal and pastel — cross-hatched, scribbled, shaded and contoured — to construct a living architecture where faces are less eloquent than limbs. Through the thicket of overlapping legs and hands that grasp, sustain and caress whatever body part they can reach, Saville, like Michelangelo, reminds us of humanity’s codependence in extremis. 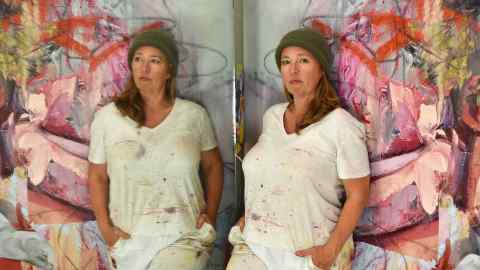 The poet WH Auden famously wrote that the old masters “were never wrong” about suffering. Michelangelo, a staunch believer, grounds his narratives of agony in the Christian story. Where Saville puts her faith is more mysterious. In works such as “Pieta I”, she seems to hold a mirror up to some anonymous, mass anguish that afflicts our era. Yet, as with her Renaissance forebears, her art both moves and heals those lucky enough to witness it. And, like theirs, it will last beyond her.