In this indeterminate twilight zone of pandemic living, I was walking home one evening when realization suddenly dawned that the Christmas lights had been switched on. Bright, beautiful, joyful! Two days of remote work interspersed with an afternoon in the office meant I’d somehow missed seeing the illuminated baubles being hoisted into the sky down my street. The exact same thing occurred after watching the new Wes Anderson flick (how gorgeous is that film about an expat magazine based in Paris, not unlike The Florentine!) at our beloved Cinema Odeon in mid-November. Released from the mind-bending movie, the unexpected appearance of the dazzling light show on the façade of the Rinascente department store made me grin during a wander around piazza della Repubblica. The preening in via de’ Tornabuoni is a different animal, of course, as the laborers even appeared to have the luxury of time in prepping the high-end decorations, lavishly dripping with gold. My favorite lights so far? The graceful zigzag of single-strand twinkle that stretches beside the nine arches of the Loggia del Pesce, down via Pietrapiana, along borgo La Croce to piazza Beccaria. Florence is unfurling all its festive magic, as captured in our December cover photo by Jessica Fradonoaka @thedishstance, and in Jack Bach’s article about the anticipation leading up to the holidays.

The general feeling is that Christmas has come early this year, which is almost certainly a result of concerns about the winter infection rate. In the two weeks prior to going to press with this December issue, our team dashed to restaurant openings (see Savourings, p. 14-15), dabbled in nightlife (read Something Strange by our intern Hayley Daffern, p. 13), attended new exhibitions (check out the month’s best events round-up, p. 10-11) and conducted interviews in-person with digital influencer and architect Sophia Sanchez (p. 20-21) and over the phone with Still Life author Sarah Winman (p. 22) in that odd duality of life, as we now know it. I even went to a gentlemen’s barber’s shop (p. 24-25)—a distinctly curious experience for a woman!

Despite the rise in Covid cases across Europe, the city’s administration is taking a pragmatic stance, encouraging a careful and conscious approach to the holidays. In his Christmas message especially for The Florentine readers, Dario Nardella, Mayor of Florenceurges that, “It’s fundamental to approach these holidays with awareness and realism. Let’s continue to get vaccinated, believe in science, wear masks and act responsibly to protect ourselves, our dear ones and for our community.” Mask wearing will be mandatory around the busiest areas of the city center from December 4 to 31 between 10am and 10pm. and a one-way system will be reintroduced for pedestrians along via Calzaiuoli and via Calimala as Christmas shopping gets underway. 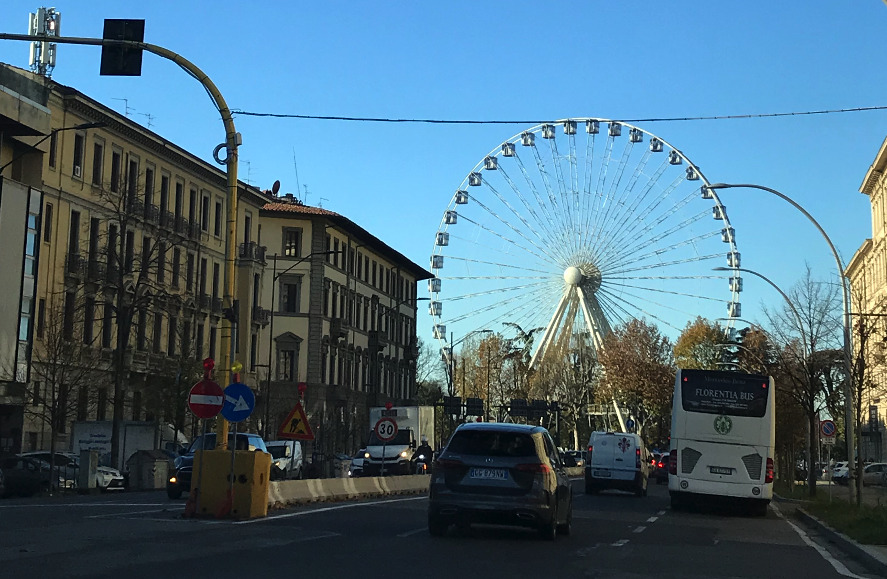 And yet, there’s far more to come from Florence this Yuletide. As tradition has it, on December 7, all the tree lights will be switched on (the one in piazza Duomo used to draw quite a crowd in pre-pandemic days—this year, we might all just prefer to stroll by at leisure at some point over the holidays). Then the hugely popular F-Light Festival will return between December 8 to January 9, meaning that the Ponte Vecchio converts into a canvas for some unforgettable projection mapping as well as on the frontages of the likes of the Chamber of Commerce and Galileo Museum, plus piazza San Lorenzo and piazza Santissima Annunziata will be emblazoned with artistic light. That’s not all. A 55-metre-high, 200-seater panoramic wheel is coming to Florence’s Fortezza Gardens after much back and forth about a possible location (piazzale Michelangelo was swiftly botched). Our very own “Florence Eye” will open for family fun on December 3 with five-minute rides continuing until January 16. Piazza Oriana Fallaci is set to become quite the Christmas venue as “Europe’s longest skating rink” (their claim: unverified!) and food stalls return around the lake after a forced break in 2019.

This Christmas, we wish you the gift of good health and much-missed winter togetherness with loved ones. 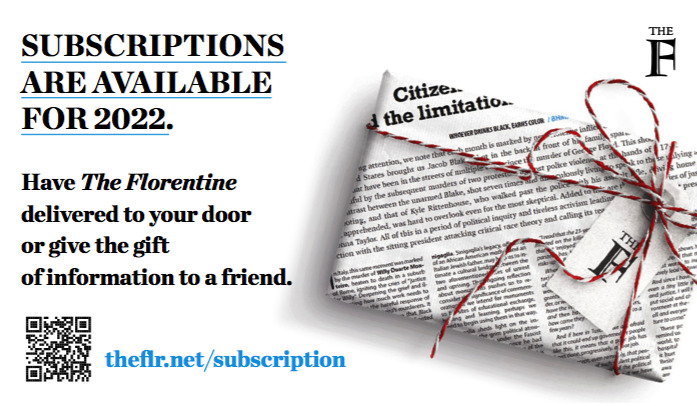