They recently tied the knot at a Santa Barbara courthouse and celebrated their union with their family and friends at a ceremony in Portofino over the weekend.

And Kourtney Kardashian and Travis Barker put on a smitten display as they stepped out for another day of their busy honeymoon in Milan on Thursday.

The reality TV star, 43, and the Blink-182 drummer, 46, cut casual figures as they walked hand-in-hand while enjoying another sun-filled day in the Italian city.

Newlyweds: Kourtney Kardashian and Travis Barker put on a smitten display as they stepped out for another day of their honeymoon in Milan on Thursday.

Kourtney flaunted her incredible figure in smart gray trousers and a skimpy white vest top, which she wore underneath a forest green jacket.

She added some extra height to her frame with a pair of pointed peach heels and clutched a small square black handbag in one hand.

The Kardashians star swept her dark tresses back into a loose up-do and accentuated her features with a bronzed make-up palette.

She shielded her eyes from the bright sunshine with a pair of rectangular sunglasses as she walked through the city holding hands with her new husband. 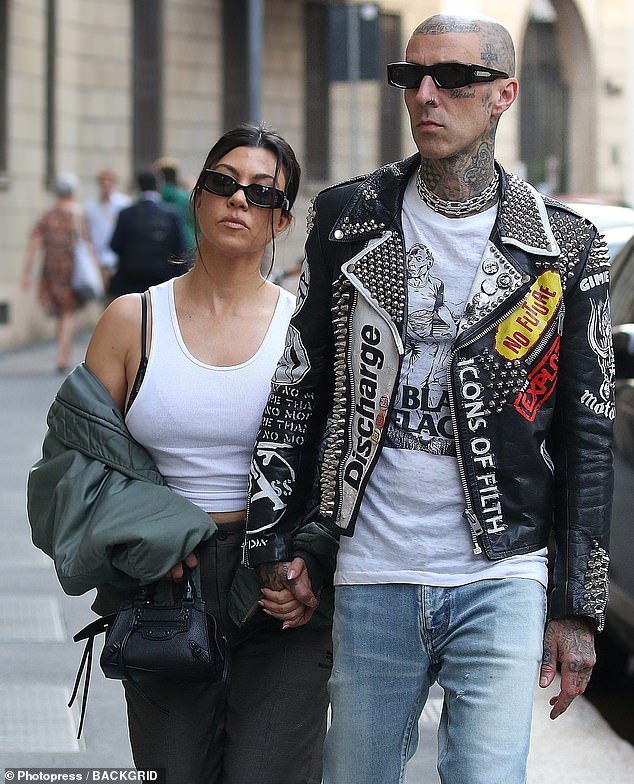 Honeymoon: The reality TV star, 43, and the Blink-182 drummer, 46, cut casual figures as they walked hand-in-hand while enjoying another sun-filled day in the Italian city.

Travis cut an edgy figure in a pair of washed-out blue jeans and a white graphic T-shirt, which he teamed with a studded black leather jacket with writing across it.

He wore a silver chain necklace around his neck and sported a pair of black sunglasses for the daytime outing.

It comes after the newlyweds were joined by Travis’ daughter Alabama and his stepdaughter Atiana De La Hoya for a visit to the Piazza Duomo on Wednesday.

Travis shares his daughter Alabama, 16, with his ex-wife Shanna Moakler while Atiana, 23, is from Shanna’s relationship with Oscar De La Hoya.

Kourtney’s children – Mason, 12, Penelope, nine, and Reign, seven – who she shares with Scott Disick, did not appear to be present after they joined the family for the Portofino wedding. 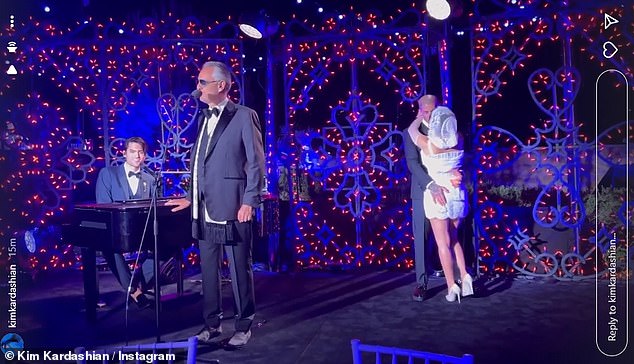 Nuptials: On Sunday, they celebrated their marriage during a ceremony at Castello Brown in Portofino with their loved ones. They are pictured dancing to Can’t Help Falling In Love

Kourtney and Travis legally tied the knot at a Santa Barbara courthouse last week after their unofficial nuptials after the Grammys in Los Angeles.

And on Sunday, they celebrated their marriage during an alfresco ceremony at the medieval Castello Brown fortress in Portofino with their loved ones.

Their latest, sponsored by beleaguered Italian fashion house Dolce & Gabbana and attended by various family members, was a significantly grander affair that appeared to bring the quaint fishing village and hugely popular resort to a standstill.

After the wedding, they stayed on the $10million 110′ Dolcevita yacht, having previously spent the week staying on the $14.2million Regina d’Italia superyacht.

And they have continued their wedding celebrations this week after traveling to Milan, where they are enjoying a busy city honeymoon.

Earlier this week, Kim and Khloe Kardashian made a low key exit from the Italian village of Portofino on Monday after celebrating their sister Kourtney’s marriage to Travis Barker.

The sisters were spotted leaving the picture postcard village in a speedboat and heading off into the Mediterranean late this morning after being picked up from a private jetty.

Kim, 41, is believed to have been accompanied by daughter North, eight, as they sat in the back of the powerful twin-engine boat operated by a four-man crew.

The Portofino wedding ceremony, conducted at dusk, was followed by a party on the terrace of the rented castle on a hillside overlooking the tourist hotspot of Portofino. 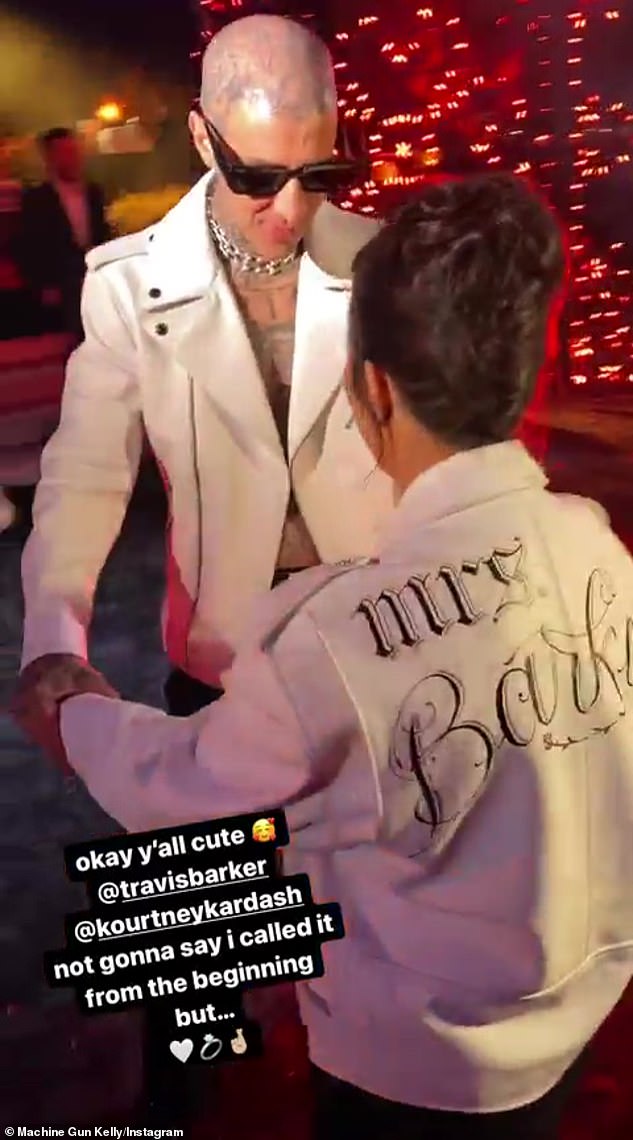 Adorable: The couple’s close friend Machine Gun Kelly also shared a recording of the couple, which showed Travis and Kourtney in matching white leather jackets on their wedding day.

Guests were ferried to the ceremony and reception space on a fleet of speedboats decked out with D&G pillows and blankets.

The secret garden ceremony venue is in the grounds of a house which has been hired by the Kardashians along with the medieval Castello Brown fortress next door.

Kourtney defied expectations by opting to skip the traditional wedding gown and, instead, wore a corseted white minidress with a cathedral length veil.

She later changed into a black mini dress for the reception.

It is believed that the newlywed couple may have spent their wedding night on the £50million yacht Regina d’Itlaia which was anchored just offshore. 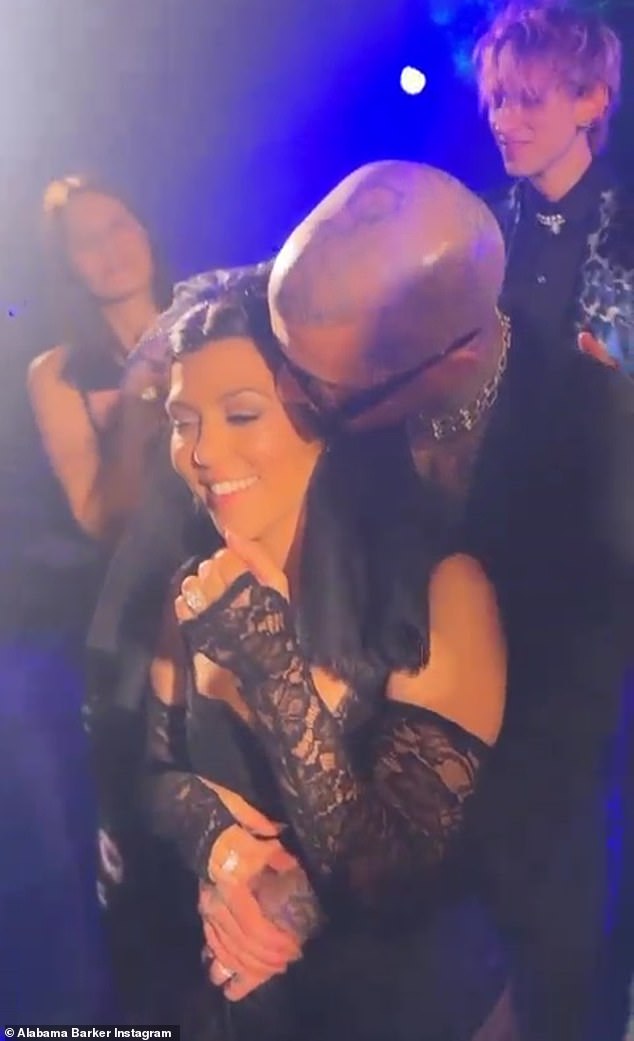 Newlywed: Kourtney donned a black mini dress and lace gloves for the reception as she danced with her new husband.

The yacht is believed to be owned by Stefano Gabbana, the co-founder of Italian fashion house Dolce & Gabbana which was sponsoring their wedding.

The couple had been staying on the extravagantly furnished vessel for several days prior to their wedding.

The yacht suddenly upped anchor shortly before noon today and headed south down the coast of Italy at 12 knots, prompting speculation that Kourtney and Travis might be staying on board for their honeymoon.

MailOnline revealed exclusively earlier this week that staff from Dolce & Gabbana’s head office in Milan had been shipped into Portofino to organize the entire wedding as part of a sponsorship deal.

Kourtney and her sisters, as well as her mother Kris Jenner, were repeatedly photographed in the brand’s outfits in the days before the wedding as they walked around the harbor area of ​​the former fishing village. 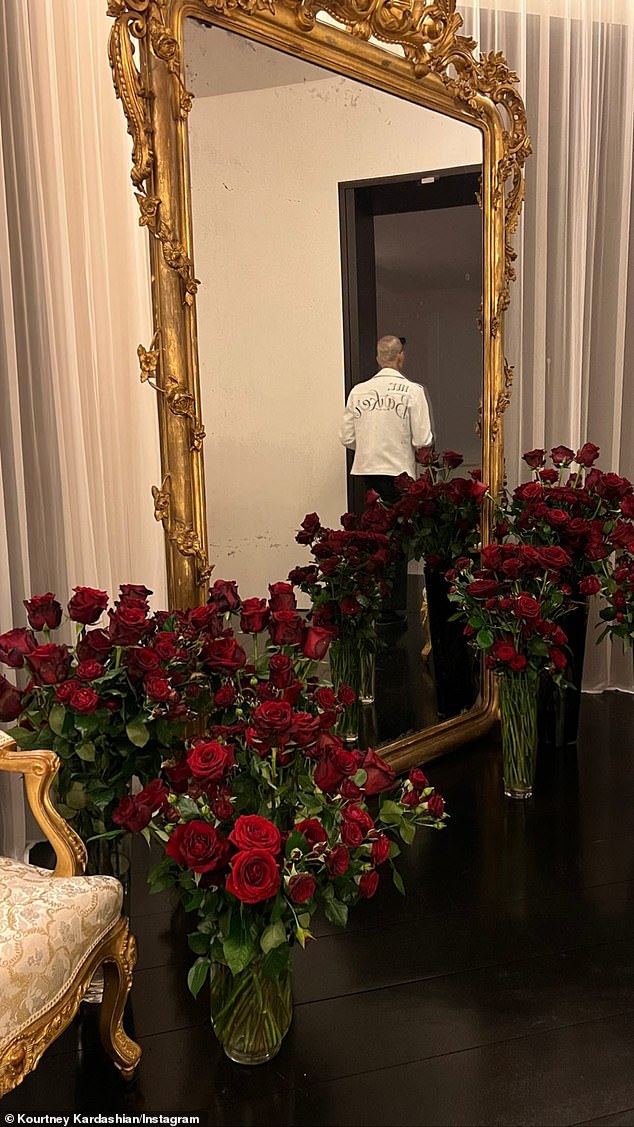 Newlyweds: Kourtney posted a snap of her new husband as she gave a behind-the-scenes glimpses at the festivities. 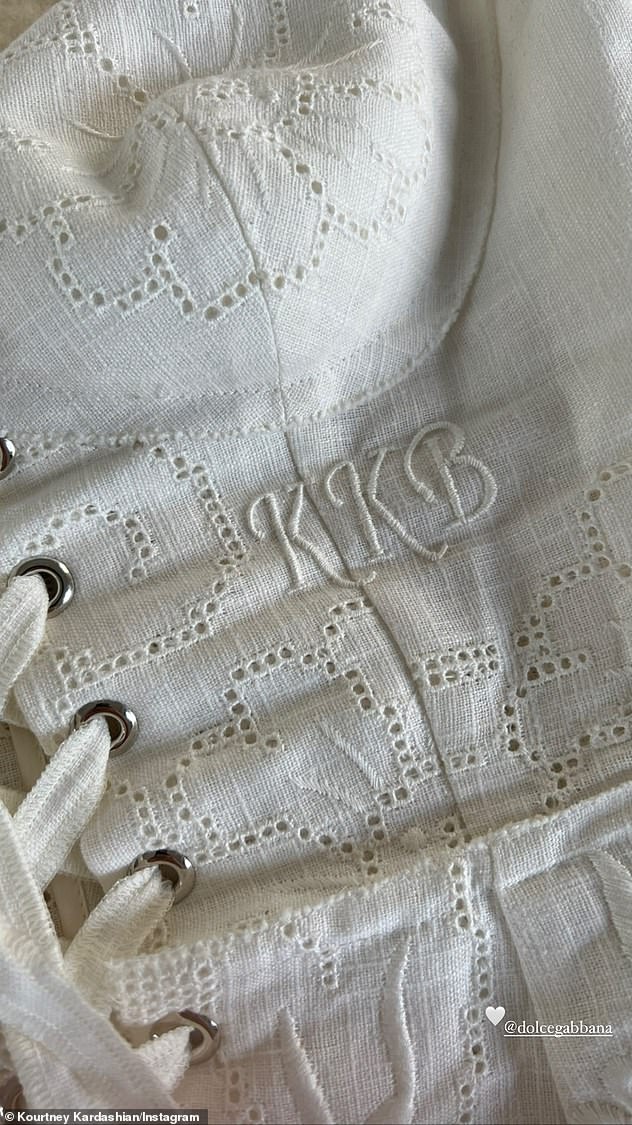 Personalized: The star revealed her D&G gown was embroidered with her new initials KKB

It is believed that the fashion house earned millions of pounds of free publicity from the Kardashian’s giving their very public support to the brand.

Dolce & Gabanna staff were today seen tidying up after the wedding celebrations, carrying away suit bags, containing outfits worn at the wedding, along with bags emblazoned with the company’s logo.

Staff made repeated journeys from the wedding venue, both on foot and by boat back to Portofino harbor, before walking along the harbor front with the items, while appearing to carefully ensure that their brand’s name was publicly visible.

It is believed that some of the bag contained dresses and outfits worn by family members during the ceremony and at the party.

A fleet of five classic Riva speedboats had taken guests dressed in their wedding finery around 400 yards from Portofino harbor to a private jetty where they could then climb up steps to the wedding venue early on Sunday evening. 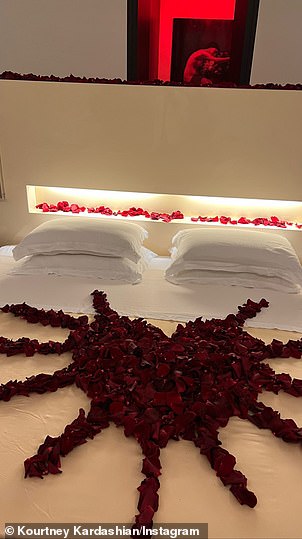 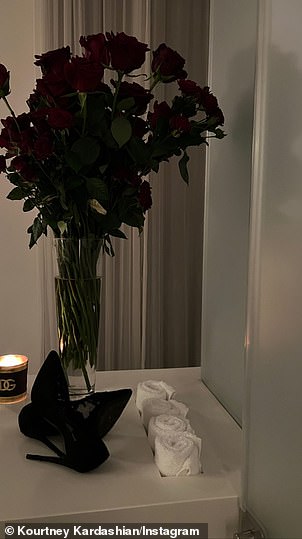 Romance: The star gave a glimpse inside her honeymoon suite after the lavish day