A bridge between contemporary and classic, a leap between real and virtual, a metamorphosis of the current and the antique: a glimpse of an unavoidable reality.

In “The Renaissance Metaverse”, Okuda San Miguel reflects on the current state of artistic creation while facing the challenge of digitalization, connecting this thought in the two different exhibition spaces that invite us to mirror on the historical evolution of the context in which we access. art.

Knowledge, science, and art are important drivers of change and historical evolution. If it was the printing press, the laws of perspective, trade routes, or the appearance of banking, today we find ourselves interacting with the internet, virtual reality, bitcoin, NFTs and, why not, complete immersion in the so-called Metaverse. 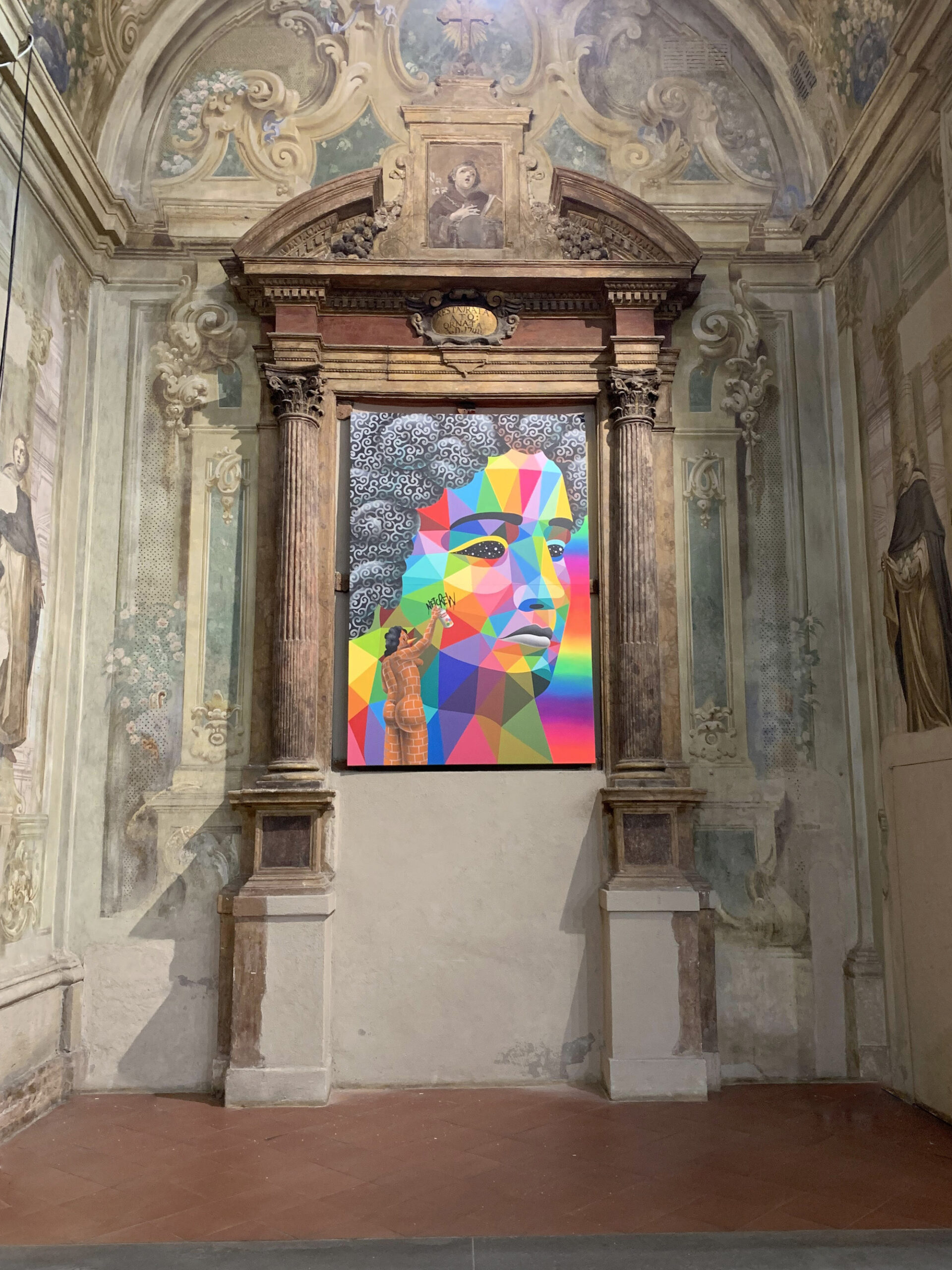 As in the Renaissance, when the classics were taken up again to reinterpret history and move towards new paradigms, Okuda approaches the present from the past. He thus shows his vision of the moment of historical transit in which, as then, we always find ourselves.

“The Renaissance Metaverse ” features paintings, sculptures, and large-scale installations created specifically for this show, integrated into the structure of the former Church of San Mattia and the exhibition space of MAGMA gallery. In this way, the artist reinforces the idea that art adapts to different contexts marked by history, to offer us the opportunity to connect with all the thought trends that lead to evolution. 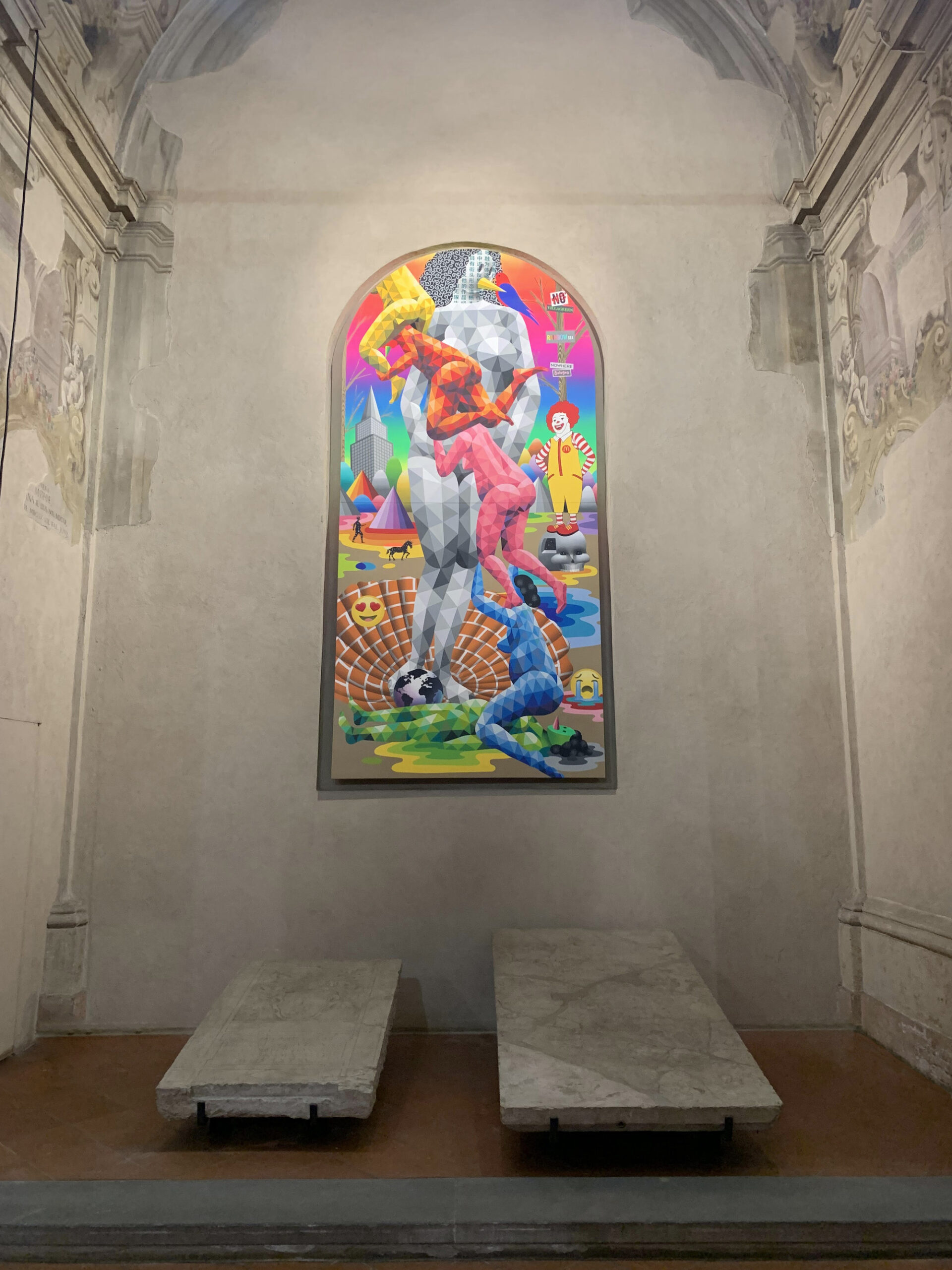 In these new works, Okuda represents some of the icons of Renaissance art with a contemporary language that transports them to new scenarios where they interact with the oneiric, with the spiritual and with postmodern reality.

The Spanish artist appropriates some of his references, placing icons and characters from the history of art in a virtual world to expose them to an unstoppable process of change in a double environment, provided by a gallery and a deconsecrated church from the 16th Century, of great historical transcendence.

“I find very interesting to ponder the evolution of art inside a temple, spaces that for centuries were, along with palaces, the only means of access to art,” Okuda says. 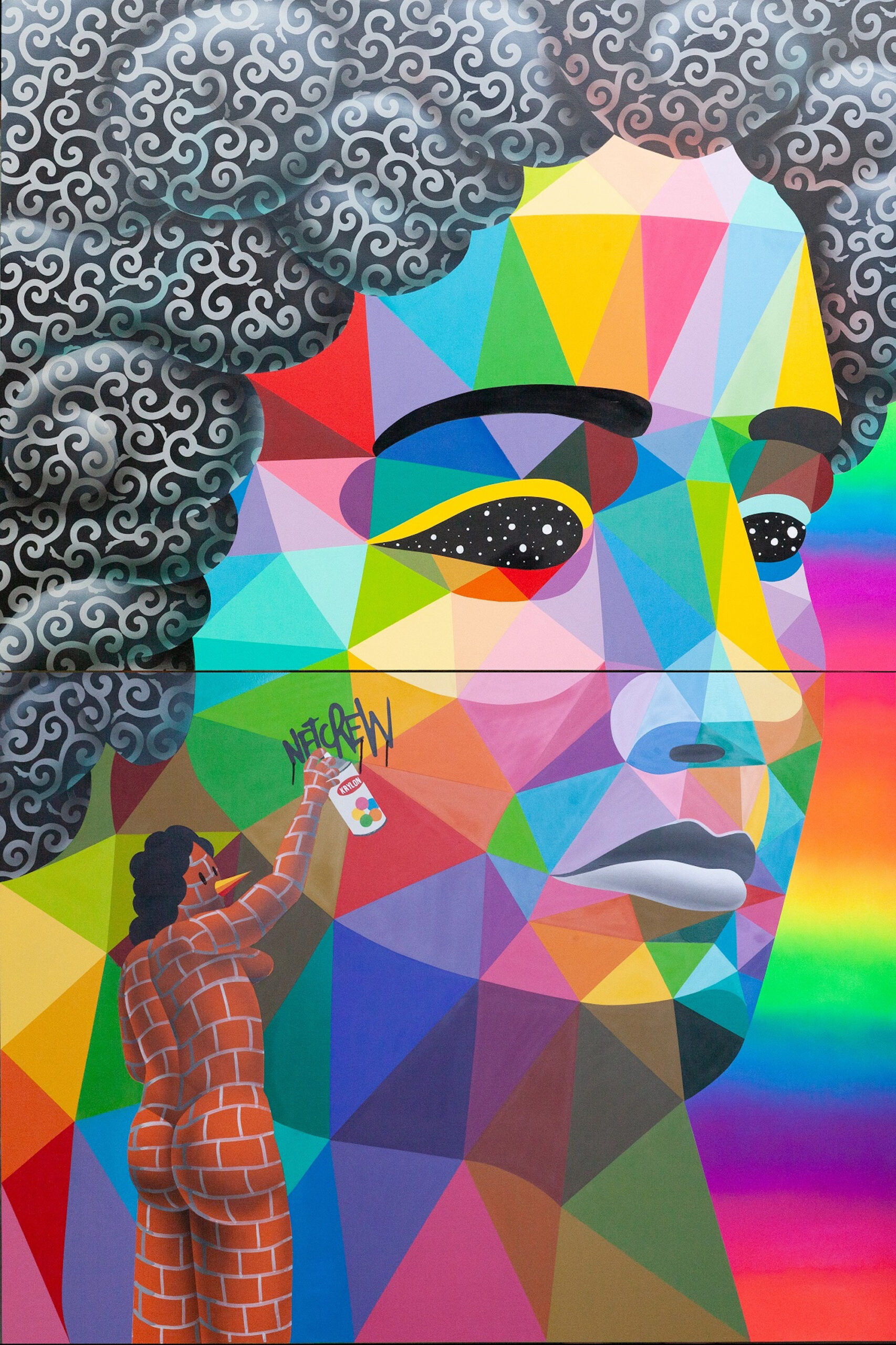 Okuda San Miguel (Santander, Spain, 1980) is one of the world’s most recognized and admired artists. In 2015, he completed Kaos Temple, a highlight of his career in which he transformed a church converted into a skate park into a showcase for contemporary art. Since then, he has been sought out by cultural institutions and private brands across the world to work on large-scale public projects, as well as for his multifaceted studio practice, which he began in 2009.

Okuda’s repertoire includes mural and sculptural interventions and gallery exhibitions on four continents. His distinctions include being the first contemporary artist to be chosen for Valencia’s prestigious Fallas festival, a spectacular series of sculptures for Boston Seaport and his participation in the Titanes project, designed to promote social inclusion through art. Shortly before his first exhibition at MAGMA gallery held in 2018, the Center del Carme in Valencia dedicated him a great retrospective and in 2016 ARCO Madrid fair commissioned him a public art project, while in 2015, among other events, he created “Heads Juice”. for Expo Milano. In 2014 he was one of the protagonists of the exhibition created by the Benetton Foundation at the CAC in Malaga.

Check out below for more photos. 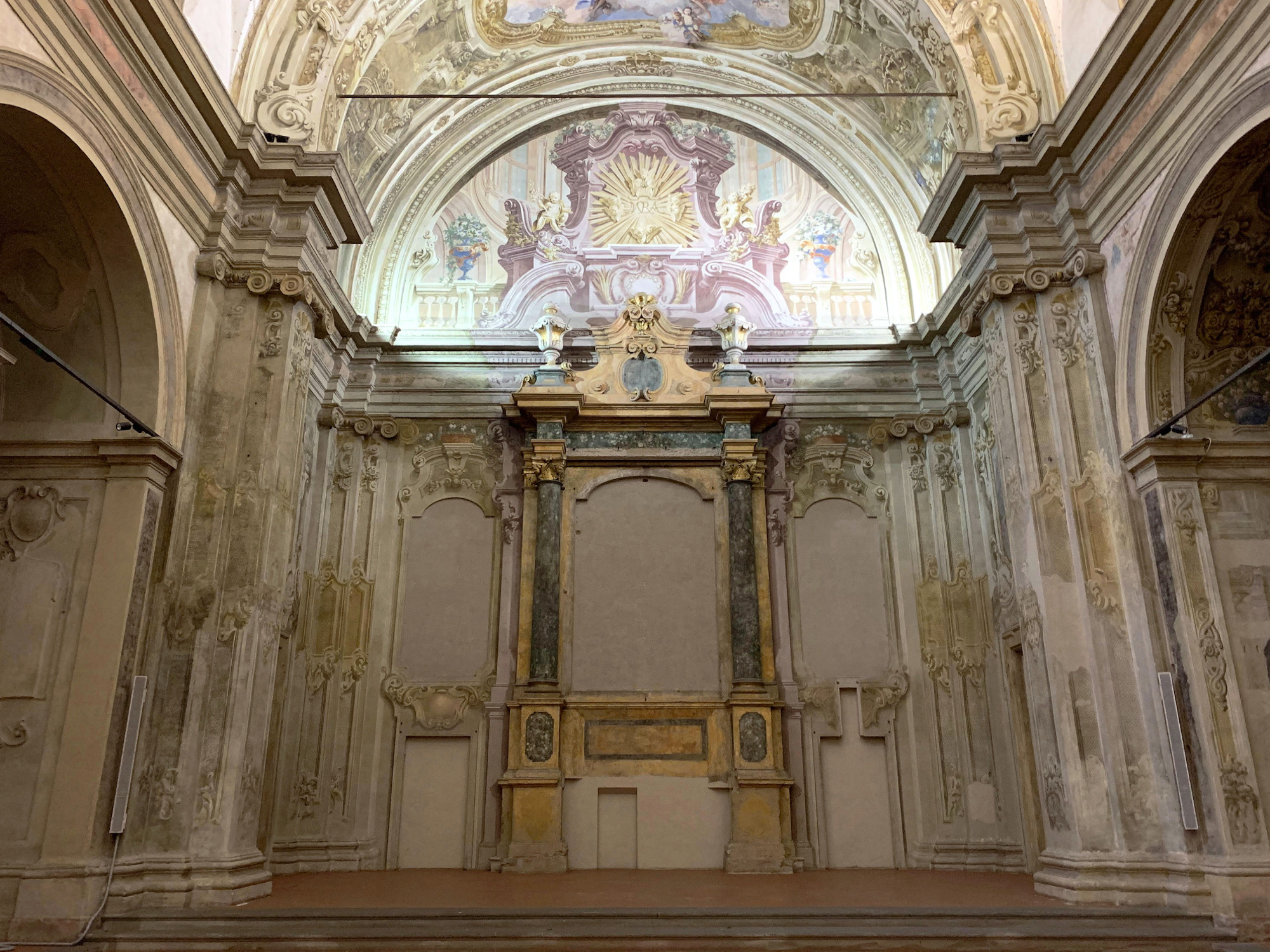 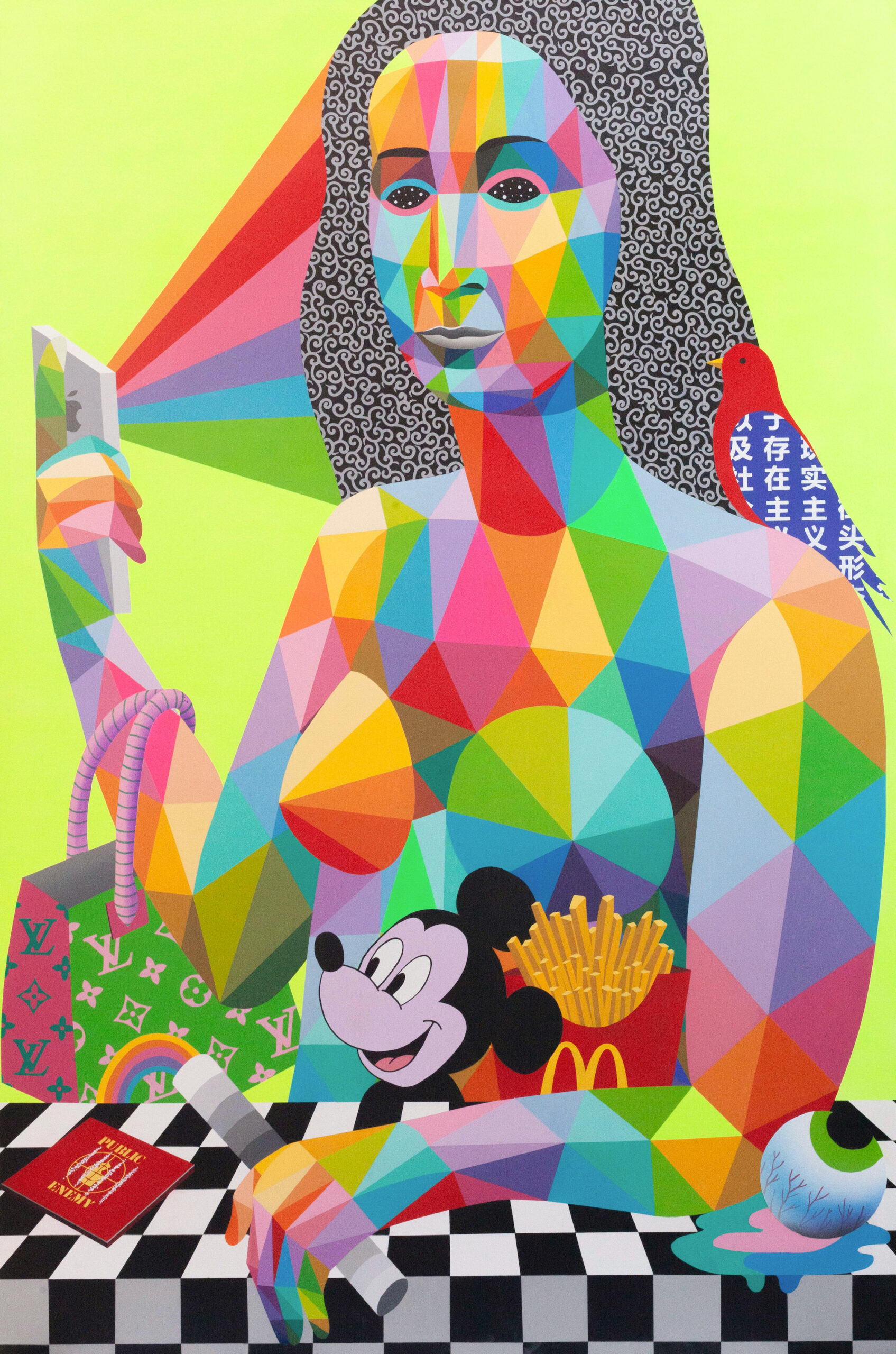