In near-desert August heat, the blue haze of the Tyrrhenian broken only by oleander and paddles of prickly pears, I’m driving to the Gulf of Palermo on the trail of a Sicilian saga — a story more decadent than Giuseppe Tomasi di Lampedusa’s family. epic The Leopard.

The monumental sandstone stage is Villa Igiea, the grand fin-de-siècle seafront hotel by the marina of Acquasanta. Even the banana palms in the botanical gardens beneath its battlements seem to conform to the original art nouveau design. Oranges dangle in front of a faux-Greek temple at the water’s edge, exactly as they did on the cover of the 1900s brochure, suggesting that behind its polite façade, Igiea — namesake of the goddess of health — was a. pagan paradise across the water from Palermo.

One doesn’t so much “stay” here as pay homage to it. The 121-year-old grande dame — revamped by Rocco Forte Hotels and opened this summer — is the symbol of Sicily’s triumphant years when the entrepreneurial Florio dynasty brought the island into the 20th century, their moustachioed heirs fueling the Sicilian belle époque, before crashing. and burning in the 1920s. They are still regarded as a modernising royal family, with a lion as their standard and Villa Igiea as their Buckingham Palace.

A room at Villa Igiea

Any good Sicilian can reel off the history of “Floriopolis”, the family’s monopolies on antimalarials, marsala, sulphur, metallurgy, shipping, banking and canned tuna, which they invented, along with the perilous Targa Florio — the world’s oldest car race. Ignazio Florio Jr and his noble wife Donna Franca had originally commissioned the Liberty-style architect Ernesto Basile to create a luxury sanatorium at the healing waters of Acquasanta, after they bought the grounds and villa from the heirs of the British admiral Sir Cecil Domville in the late 1890s. But in 1899, a year before they opened, they changed the plan to a Monte Carlo-style grand hotel with its own Cercle des étrangers club.

Donna Franca, the story goes, was a fin-de-siècle Jackie Kennedy who had captivated European royals on the circuit with her southern glamor. Edward VII, Kaiser Wilhelm II and Tsarina Feodorovna set sail to visit the “Queen of Palermo” at her new resort. The gentle gradient of steps, it turned out, made it wonderfully easy for tipsy blue-bloods to stagger upstairs. The soundproofed leather doors and porticos were aids to discreet rendezvous, and the fountain was just the ticket for “skinny-dipping” — by Edwardian standards at least. A spirit of decadence reigned, encouraged by topless maidens frolicking amid poppies in Ettore de Maria Bergler’s salon frescoes. Oscar Wilde held court here. Tsar Nicholas II palmed off mistresses to Ignazio. In Giovanni Boldini’s Portrait of Donna Franca Florio she wears a pearl necklace — its 365 gems said to be her husband’s apology for the number times that he strayed, so legend has it.

The fun and fortunes of the Florios were halted by the First World War. Bought by the Bank of Sicily, Villa Igiea went through several incarnations — a haunt for fascist officials; a hospital — before its 1950s second coming, when Grace Kelly and Prince Rainier, Maria Callas and Aristotle Onassis attended salon galas, and the eccentric Gino Morici painted folk murals on the walls of the nightclub. In 1962 the cast of Visconti’sThe Leopard moved in; Burt Lancaster took room 237. But in the 1990s, after two decades in nosedive, the hotel was bought by a Roman property mogul, who went bankrupt in 2017.

By the time the Forte family bought Villa Igiea in 2019, making it their eighth Italian hotel, it was not so elegant. “You’d open the bedroom shutters and they’d fall off in your hands,” says Philip Vergeylen of Nicholas Haslam studios, who with his partner, Paolo Moschino, redesigned the villa for its fourth act, under the eye of Olga Polizzi, Rocco Forte’s sister. Forte himself demanded: “It has to be grand!” Their answer was a cool Edwardian reboot, honoring Sicilian artisans.

The renovations cost a reported £43 million. Carpets were ripped up, frescoes restored, rooms reconfigured (there are now 78, with 22 suites). The duo wrangled for permission from La Permanente, Italy’s national heritage board, to change every inch of public space. Their request to replace the floor in the Florio restaurant, redone in the style of an airy palmed Parisian tearoom, was flatly denied. The proposed reinstatement of a geometric porcelain floor beloved of Franca became a war of attrition they finally won — the handmade cream tiles so beautifully wobbly you could never tell that she hadn’t once danced over them.

The designers delivered Forte’s grand hotel. And in our insipid age, it’s easy to feel a pale protagonist wandering its marble enfilades, past double-height art nouveau doors and ballrooms; in the Salone Basile the frisky nymphs now seem to gambol with cheeks as rosy as freshly plucked apples. It’s apt that the main entrance, facing Monte Pellegrino, was once used by staff (the beau monde arriving unto the stone balustrades by sea). Here, bellboys cut a dash in silk flat caps and waistcoats like hip Sicilian Buster Keatons, ferrying luggage past the aristocratic noses of ceramic greyhounds through a hallway painted like a Sicilian orangery. Meanwhile, faded pastel portraits and daguerreotypes of Franca are zinged up by colour-popping urns and Sicilian moor’s head vases (the Moor’s wife, less tolerant than Donna Franca, decapitated him for cheating).

The stairs’ gentle gradients are now handy for staff nimbly scooting up floors to meet guests from the orange-box sized lift. My suite (121) is all high-ceilinged gentlemanly restraint in shades of Dijon mustard, cigar browns and starched-shirt whites, and fit for a grand war correspondent. The terrace is the size of a smallish theater and the height of the umbrella pines. My eyes shift constantly between the green and the gulf’s blue; the clink of the marina and the call of gulls mingling with birdsong. Below, the hotel’s lungomare zigzags all the way from the ersatz temple to the spa, in a 1980s extension. Here the weary designers went mad in a joyful celebration of Sicilian-lemon and blue tiles — also a dutiful nod to Irene Forte’s range of local organic products, for which orange blossom and aloe vera were harvested from the orchards of the group’s Verdura Resort near Agrigento. . Freshly squeezed orange juice and grillo (the island’s famed white wine) flow all day in the restaurants. Alicetta, by the 1950s kidney-bean pool, is delicately perfumed with hibiscus and grilling snapper. The balustraded Terrazza leads to the bar, its original stone fireplace, vaulted ceiling and wood panelling reminiscent of a Scottish castle’s hunting lodge — even with Morici’s Sicilian frescoes. In Florio, the creative director of food, Fulvio Pierangelini — who despite his healthy home-grown menus has the epicurean presence of a Roman Gérard Depardieu — inspects passing plates of turbot with clams among the palms and pea-green sofas.

Fifteen minutes’ drive away, Palermo still languishes in faded grandeur — 18th-century English gardens stand politely in oleander-filled squares by art nouveau lampposts cast at the Florios’ foundry, while artisan studios sell Moor’s heads at the bottom of decapitated buildings bombed in. the Second World War, when the centro store was abandoned. Liberty-style palazzos alternate with 1960s monstrosities, the originals torn down and rebuilt by the mafia during their Sack of Palermo, when many piazzas were turned into gang-run car parks. “Palermo never had another family like the Florios to return it to its former glory,” says Mauro, my guide. “But some of the most dilapidated palaces have Van Dyck collections.”

The glorious Palazzo Gangi, where parts of the film version of The Leopard were shot, charges £770 for tours to pay for its upkeep. Other abandoned palaces stand shoulder to shoulder with restored versions; Palazzo Drago is a museum with Maria Bergler’s trompe-l’oeil frescoes.

There are early signs of a renaissance here, sparked by Unesco’s recognition of the city’s Arab-Norman architecture, the centro store‘s pedestrianisation and Palermo’s status as Italy’s capital of culture in 2018 — when the final parts of Ernesto Basile’s neoclassical opera house, Teatro Massimo, were renovated. It is now possible to stroll, blinking in the intense lemony light, through Vucciria — the once chaotic portside market — past covered balconies (originally to hide women’s ankles) to the marble nudes of the Fountain of Shame or palm-filled piazzas that open out like forgotten chapters. The famous Fontana Pretoria in Palermo

The monastery of Santa Caterina was unsealed recently — occupied for 700 years by cloistered nuns who administered cannoli and cakes including “the breasts of the virgin”, baked according to secret ecclesiastical recipes, through a hatch.

Stephanie Rafanelli was a guest of Villa Igiea and Abercrombie & Kent, which has four nights’ B&B from £1,789pp, including flights and transfers (abercrombiekent.co.uk).

Government and Foreign Office travel restrictions are in place at present. For details on domestic rules and overseas travel advice see gov.uk San Domenico Palace, Taormina
This island grande dame has had a luxury makeover: the 14th-century monastery and fabled outpost of the Sicilian Grand Tour was frumpy and tired, but still had that snowy Etna backdrop, a Liberty-style wing, a front row of Ionian coastline and the frisson of more than a century of illustrious Italophiles (Wilde, Stravinsky, Audrey Hepburn) passing through its doors. Then Four Seasons took over. The result is 111 pared-back rooms and suites with nods to the Grand Tour and restaurants focusing on Etna’s volcanic terroir overseen by Sicilian Massimo Mantarro.
Details B&B doubles from £399 (fourseasons.com). Fly to Catania 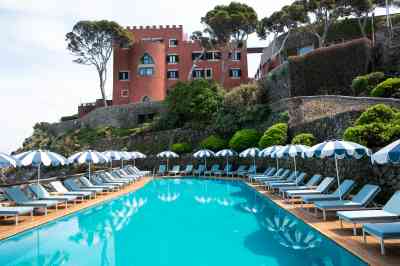 Mezzatorre Hotel & Thermal SPA, Ischia
The Italians came to Ischia to soak in the thermal baths. Now the English come too, for Mezzatorre. Originally a 16th-century Aragonese watchtower (torre) but only half built (mezza), the castle hotel, on a rocky northern headland, was revamped by Il Pellicano’s Marie-Louise Scio in 2019. Its 45 rooms and suites are scented by air rising from the indigo waves beneath and the pine forest around. There’s a saltwater pool and Vesuvius provides the volcanic mud for the spa.
Details B&B doubles from £577 (mezzatorre.com). Fly to Naples 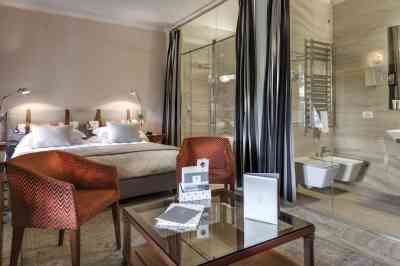 Hotel Augustus, Forte Dei Marmi
Nothing much has changed at Hotel Augustus, the maximalist five-star icon of the Versilian Riviera since 1953, when the socialite Augusta Pesenti opened up her modernist villa to guests (one of whom was Jimi Hendrix). It is run by the Maschietto family, descendants of the hotel’s mastermind. Devotees still take a private tunnel to their beach cabins at the Bambaissa club, sip negronis at the white art deco bar in Villa Pesenti and order afternoon tea from the vintage Sanderson-print chairs. But that, of course, is very much the point.
Details B&B doubles from £254 (augustus-hotel.it). Fly to Pisa